Read all the news about our company

HonourableBlogUncategorizedGenetically modified foods ; The myth and truth of the unending debate.

October 23, 2017 No Comments By Honouradmin Uncategorized

Genetically modified foods ; The myth and truth of the unending debate.

Man ever since creation has evolved and survived well chiefly because of his instinct for survival which has hitherto driven him towards knowledge and research to fulfil his basic needs;  Food, cloth and shelter and also to improve his environment and life generally.
For centuries, there has been scientific researches and projects aim at improving and increasing food supply to meet the food demand of the ever increasing world population. Earlier researches aim at achieving this include selective breeding involving artificial and natural selection as well as mutation breeding. With more advancement in knowledge and scientific research, there was the development of the most recent method of plant and animal improvement; genetic engineering or generic modification which is the direct manipulation of an organism’s genome using biotechnology. It is a set of technologies used to change the genetic makeup of cells, including the transfer of genes within and across species boundaries to produce improved or novel organisms called genetically modified organisms.
Over the last few decades there has been serious debate on ethics, acceptability and potential risk attached to making use/consuming genetically modified organisms. The argument for and against GMO has been overwhelming, and seems endless. If the world is to move on from the debate, benefit from GMO and reduce its risk, there have to be a non bias approach towards striking a logical mid point on the subject matter.
The earlier methods of plant and animal improvement; Selective breeding and mutation breeding.
In selective breeding the aim is to use animal breeding and plant breeding to selectively develop particular phenotypic traits (characteristics) by choosing which typically animal or plant males and females will sexually reproduce and have better offspring otherwise knows as crossbreed and hybrids in animal and plant respectively. It is largely artificial, but could be natural atimes.
Mutation breeding , sometimes referred to as ” variation breeding”, is the process of exposing seeds to chemicals or radiation in order to generate mutants with desirable traits (or lacking undesirable ones) to be bred with other cultivars . These knowledge was developed right after the 2nd world war in  a concerted effort to find ‘peaceful’ uses for atomic energy . This was the second old order of plant improvement , after selection and From 1930 to 2014 more than 3200 mutagenic plant varieties were released.
The  recent method of plant and animal improvement; Genetically modified organisms
According to the World Health Organization, “Genetically modified organisms (GMOs) can be defined as organisms (i.e. plants, animals or microorganisms) in which the genetic material (DNA) has been altered in a way that does not occur naturally by mating and/or natural recombination. The technology is often called ‘modern biotechnology’ or ‘gene technology’, sometimes also ‘recombinant DNA technology’ or ‘genetic engineering’. Foods produced from or using GM organisms are often referred to as GM foods. Genetic engineering techniques allow for the introduction of new traits as well as greater control over traits than previous methods such as selective breeding and mutation breeding. 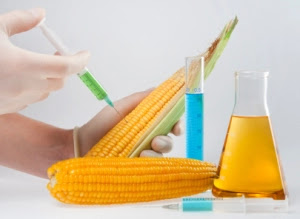 Advantages of genetically modification of organisms and results gotten so far.
The first crops to be realized commercially on a large scale provided protection from insect pests or tolerance to herbicides. Fungal and virus resistant crops have also being developed or are in development. This make the insect and weed management of crops easier and can indirectly increase crop yield. GM crops that directly improve yield by accelerating growth or making the plant more hardy (by improving salt, cold or drought tolerance) are also under development.
• Salmon have been genetically modified with growth hormones to increase their size.
• Genetically modified soybean has been modified to tolerate herbicides and produce healthier oils.  In 2015, 94% of soybean acreage in the U.S. was genetically modified to be glyphosate-tolerant.
• Corn used for food and ethanol has been genetically modified to tolerate various herbicides and to express a protein from Bacillus thuringiensis (Bt) that kills certain insects.
GMOs have been developed that modify the quality of produce by increasing the nutritional value or providing more industrially useful qualities or quantities.
• The Amflora potato produces a more industrially useful blend of starches.
• Cows have been engineered to produce more protein in their milk to facilitate cheese production.
• Soybeans and canola have been genetically modified to produce more healthy oils.
• The first commercialised GM food was a tomato that had delayed ripening, increasing its shelf life.
• Papaya was genetically modified to resist the ringspot virus PRSV. New York Times stated, “in the early 1990s, Hawaii’s papaya industry was facing disaster because of the deadly papaya ringspot virus. Its single-handed savior was a breed engineered to be resistant to the virus. Without it, the state’s papaya industry would have collapsed. Today, 80% of Hawaiian papaya is genetically engineered, and there is still no conventional or organic method to control ringspot virus.
• As of 2005, about 13% of the Zucchini (a form of squash ) grown in the US was genetically modified to resist three viruses; that strain is also grown in Canada.
• In 2011, BASF requested the European Food Safety Authority ‘s approval for cultivation and marketing of its Fortuna potato as feed and food. The potato was made resistant to late blight by adding resistant genes blb1 and blb2 that originate from the Mexican wild potato Solanum bulbocastanum.
• In 2013, the USDA approved the import of a GM pineapple that is pink in color and that “overexpresses” a gene derived from tangerines and suppress other genes, increasing production of lycopene .
• In 2014, the USDA approved a genetically modified potato developed by J.R. Simplot Company that contained ten genetic modifications that prevent bruising and produce less acrylamide when fried.
• In February 2015 Arctic Apples were approved by the USDA, becoming the first genetically modified apple approved for sale in the US. Gene silencing is used to reduce the expression of polyphenol oxidase (PPO) , thus preventing the fruit from browning.
Plants and animals have been engineered to produce materials they do not normally make.
• Cows and goats have been engineered to express drugs and other proteins in their milk, and in 2009 the FDA approved a drug produced in goat milk.
•  Golden rice is a variety of rice (Oryza sativa ) produced through genetic engineering to biosynthesize beta-carotene , a precursor of vitamin A , in the edible parts of rice
• Golden banana, a version of the golden rice has also been recently produced. 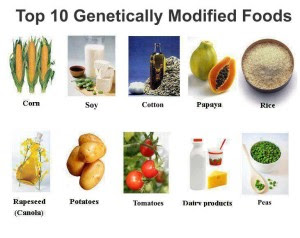