Read all the news about our company

October 23, 2017 No Comments By Honouradmin Uncategorized

THE PROS AND CONS OF THOROUGH LAND PREPARATION.

Recently a client engaged me to set up her 7 hectares cassava  farm, she was clear about what she wanted and what she does not want.
“I already have a cleared land, all I need from you is just technical back up, to get me a good variety of cassava, fix on the soil , bring in fertilizer and help me do routine check up till it is ready for harvest”.
It wasn’t my 1st time a client will  be describing an 8-12 months job in just 8-12 minutes, ofcourse it is always a pleasure listening to clients farm with mouth!
On what she does not want she said
“I have planted maize this year on the same land and I suffered a great loss, so poor, I could not even recouped half of the money spent talk more of profit, I felt so discouraged.” I said to myself, “familiar story”, often people have garbaged in to agriculture like that and hit their head hard on a rock. It can be so painful.
We proceeded to her “cleared” land and I got the shock of my life. It was nearly as worst as a virgin land, what is on the “cleared” land is beyond just super weeds, with great heights, one can see left over stumps already growing back to trees. I turned back to the client and said to her;
“we may have a clue as to why your loss on the maize was enormous, your land preparation was bad and under 4 weeks, weeds outgrew your maize and you lost the control of your farm to the weeds.”
How did you know that,she said and I replied,your land look to me like nothing has been cultivated on It this season. It showed you might have run to problem with weeds during your maize cultivation. And Maize! I have never planted any crop lower in tolerance for poor land preparation. This is because maize can not tolerate one of the major consequences of poor land preparation which is strong weed outgrowth. I have once been a victim. Make no mistake, the effect is the same for almost all crop types.
What is land preparation.
Land preparation can be defined as the process of getting the soil ready for planting, to provide a soil environment favorable for plant germination and/or growth. Land preparation covers a wide range of practices from zero-tillage or minimum tillage which minimizes soil disturbance through to a totally ‘puddled’ soil which actually destroys soil structure.
It typically involves (1) plowing to “till” or dig-up, mix, and overturn the soil; (2) harrowing to break the soil clods into smaller mass and incorporate plant residue, and (3) Ridging or leveling the field.
Initial land preparation begins after last harvest or during fallow period. This is important for effective weed control and for enriching the soil. Generally, it will take 3−4 weeks to prepare your land before planting.
It is important that we don’t mix land clearing up with land preparation. Land clearing is a single operation under the wilder concept ; land preparation. 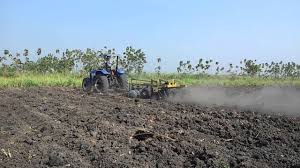 Details of sequential stages in land preparation.
1. Removal  of trees/Land clearing :-
This is done mainly for a virgin land, and the major machine used here is Bulldozer.
2. Removal of stumps :-
This is always done manually, as no machine precisely and completely  takes out the stumps. If stumps are not removed from fields, ploughing becomes difficult, plough frame and disc may spoil, you also risk damaging tractor tyre.
3. Soil testing :-
Important part of soil preparation entails testing soil to determine its current nutrient levels to determine fertilizers to be used to balance deficiencies.
4. Ploughing :-
This is the process of cultivation of soil in preparation for sowing seed or planting to loosen or turn the soil. Ploughs were traditionally drawn by working animals such as horses or cattle, but in modern times are drawn by tractors.
The primary purpose of ploughing is to turn over the upper layer of the soil, bringing fresh nutrients to the surface, while burying weeds and the remains of previous crops and allowing them to break down. Ploughing sets the stage for the next phase of land preparation which is harrowing.
5. Harrowing :-
This is the breaking up and smoothing out the surface of the soil. It is distinct in its effect from ploughing, which is used for deeper tillage. Harrowing is often carried out on fields to follow the rough finish left by plowing operations. The purpose of this harrowing is generally to break up clods (lumps of soil) and to provide a finer finish, a good tilth or soil structure that is suitable for seedbed use.
6. Ridging :- making of hips by a reverse plough or single direction plough system. This is not recommend for all crops.
Importance of land preparation
for planting, a well-prepared field controls weeds, recycles plant nutrients, and provides a soft soil mass for transplanting and a suitable soil surface for direct seeding.
Whether growing lawn grass, ornamental flowers or garden vegetables, preparing the soil before planting is essential. Soil needs to allow water to enter the ground efficiently so that it may be drawn up and used by developing plants. The following are the specific importance of thorough land preparation.
Water Efficiency
In good growing conditions, soil allows plants to take up and retain the necessary amounts of water to sustain growth while permitting excess water to drain efficiently.
Weed Control
Better weed control is another important reason to prepare soil thoroughly before planting. Weeds that are not removed in advance of planting continue to grow and spread, competing with the intended plants for critical water and nutrient resources.
Addition of Nutrients
Helps mix harvest residue, organic matter (humus), and nutrients evenly into the soil.
Growing plants can quickly deplete garden soil’s existing supply of essential nutrients. Therefore, an important part of soil preparation entails testing soil to determine its current nutrient levels and then adding fertilizers to balance deficiencies.
Production maximization
Using a thorough land preparation procedure  to prepare soil helps to maximize crops’ production.
Others include
Loosens and aerates the top layer of soil or horizon A, which facilitates planting the crop
Dries the soil before seeding (in wetter climates tillage aids in keeping the soil drier)
Conclusion
Poor land preparation can lead to poor, uneven or weedy stands. Soil crusting can reduce seedling emergence (especially in soils high in clay and silt). Soil testing ensures you know the right quantity of fertilizer and nutrients your soil requires. The advantages of land preparation are numerous likewise the side effect of poor land preparation can be devastating and capable of chasing you off farming. The choice is always yours!
At Agritreasure, we ensure your lands are properly prepared and we are ready to monitor all operations for you ,from clearing to harvesting.
Aliyu Ahmed Olanrewaju
Researcher/Agribusiness consultant.
Twitter Facebook Google+ LinkedIn